Embellished with a brass vent.

Tribute ll is my second hollow wood paddleboard (see below for information on Tribute l).

These boards are my way of honoring the past on several levels; the old-growth redwood trees from which the wine tanks were constructed, the ancient south pacific watermen, the native Hawaiians who first surfed on solid wood olo and Alaia boards, the early 20th Century Anglo surfers (such as Tom Blake and Sam Reid) who popularized the sport – and the lifestyle – on California’s beaches, and the ocean which connects it all – past, present, and future. 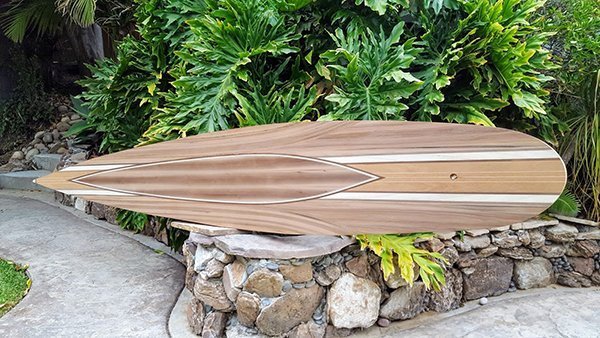 For more background on Tom Blake, here is an excerpt from Wikipedia:

While in Hawaii, Blake became fascinated by the traditional surfboards preserved at The Bernice Pauahi Bishop Museum in Honolulu. These included a variety of styles, from the shorter Alaia to the heavy, 16-foot long olo boards traditionally reserved for royalty.

On his 1926 visit, he was able to secure permission from the curators to study the boards’ construction and restore several of them.

He then began his own experiments in improving surfboard design. Up until that point, most modern surfers, even Duke Kahanamoku, used the shorter Alaia boards due to the immense weight— up to 200 pounds— of the solid olo boards. Blake initially sought to build lighter olos by drilling hundreds of holes in the board, then covering the openings with a thin outer layer. This was the style of board he used to win the 1928 Pacific Coast Championship.

Then after three years of experimenting, in 1929, Blake constructed a hollow board with transverse bracing. In 1931, he received a patent for his hollow surfboard design “and opened the sport up to hundreds of people who weren’t able to muscle the heavy plank boards down the beach and into the water.”

One historian remarked: “Blake changed the whole scene by working on these boards. He single-handedly, without really giving it much thought, changed surfing in a massive, huge way. It was because of this we are doing what we do on boards.

© 2020 Michael Rumsey Art. Designed & Managed by ViziSites. Terms of Use.